Welcome to the new podcast

Proud to be Woo 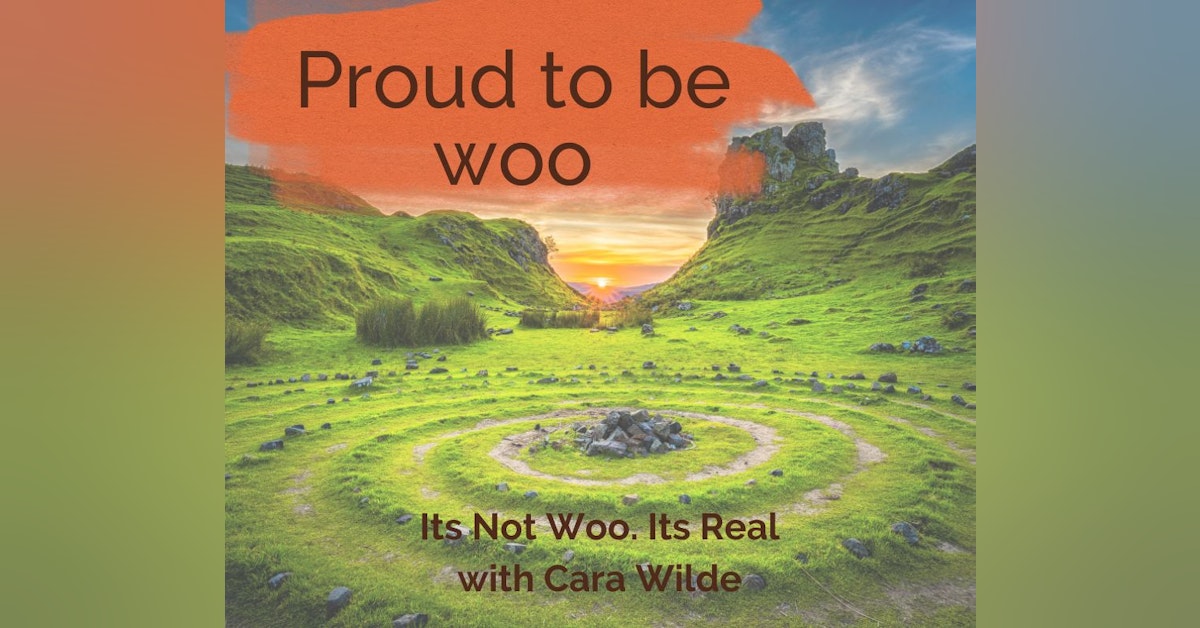 How do we reclaim the word woo?
And is that possible?
In this episode I lay out the foundation of the podcast Its Not Woo, It's Real and how the new podcast title came to be.

How to reclaim the word woo and why that might be important for us.
The link between the woo and creativity

I lay out the foundation of the podcast and how the new podcast name came to be
Reclaiming a sense of professional pride for this ancient profession.
How I hope this podcast will create a sense of community and belonging in what can be a lonely, isolating and oppressed profession.

Well, hello and welcome to the first ever episode of It's Not Real, It's real. So glad that you are here and if you followed me before with the way of the sensitive podcast and it's still coming up on that feed, and thank you so much for staying and welcome back. Good to be here if you're new. Hi, thanks for joining us.

Pull up a metaphorical chair, Get a snuggle blanket, a glass of wine, a cup of tea. What? Look out the window. See the nature of the birds. Whatever image comes to mind to help us to connect in a warm and. Snugly environment, then I welcome that. So thanks for taking the time out of your day to listen to this podcast and you know the space outta your working memory.

More importantly, it's really good to be in your company. So why it's not where it's real. This really first short episode, I wanted to explain that. Because I'm hoping that it's grabbing people's attention and first of all, it was born out of frustration and then it was just born out of a celebration really, and a bit of a play on words.

So it kind, that word was really new to me. When I first came online with my spirituality and business. 12 years ago, 13 years ago maybe. And my spirituality up to that point had like been rich and varied and just so much a part of my everyday life for crikey since I was 17. And I was surrounded by people that lived and breathed their spirituality.

It was just like, that was the basic understanding. And then I came online and apparently that's woo. I'm like, What? It's, what's what? , What woo?. What? . And it wasn't a pleasant term,  you know, So it was used as a bit of put down really. It was derogatory for something that is like been around for so long, and it's such a sacred part of so many people's lives, so many different cultures.

Ancient cultures. And traditions and it was based in science, quite a lot of it. And you know, it was a respected kind of profession. In a lot of ways in my experience.   I was kind of trained in the UK spiritualist churches as a medium and so we. Help people get messages from their loved ones, from peace of life peace of mind, and help them to experience profound peace about the fact that they'd not really lost their loved ones.

They'd just gone to the other side of the wall kind of thing, you know, so, I, it was quite an insult to a sacred, traditional way of living and operating in the world, and I'd already started to think of my ability to read energy and to do reiki and heal and get messages like our family solve quite a few problems from getting messages from people that had passed over.

For me was like I really respected that profession when the kids were really little. My eldest in particular was struggling to settle and as soon as I took them to a cranial sacral therapist they responded really well. What had probably been a headache for them since they were born just kinda went and they just rested and they were more peaceful.

And that's the sort of stuff that was considered woo in this really derogatory way. I'm thinking, Hold on a minute. All this stuff is kinda working. When the more acceptable models of the world, say our western. Medicine models or our psych therapy models like just weren't helping people these alternative ways or not, I don't even like that term anymore, but just there were various offerings within our modern world that had different roots to wellness, different roots to yeah, improvement, I guess.

And different ways of accessing different information that would then empower and inform an individual on their life path that they could use in whatever they way that they wanted. And it was just felt like, I probably want to use this word back then. But it just felt really divisive. You know, you either woo or you're not, and it's just like, that's just crap.

Insulting and really superior. And so then I just kind of thought, you know, whatever. Whatever, and just carried on doing my own thing. And then it got to a point where people were starting to say, You know, this might sound a bit woo, but I feel really sad today. And I'm like, You gotta be kidding me. We're calling emotions woo. Now. Really? That's how bad it's got.

So this podcast. The it's not woo, it's real, was really an act of defiance to start off with. That was my original intention. It's just like, Right, that's it. I am going to champion the woo and celebrate the woo. And that's kind of what I did with the way the sensitive podcast.

But actually it's like the Woo is a way of life, I guess. So the Woo is like, for me, it's when I say it's not woo, it's real. That's what I'm referring to, people putting it down. So basically when I think of reclaiming the word woo, and people have told me that you can't. And and I just, I also want to be mindful that when I'm talking about you, This term being used in quite an oppressive way.

I'm very much aware that there are more painful ways of being oppressed in our society right now. You know, I am white, I am cis, I am bi and I am considered neuro diverse. So I have got some parts of me that society would want to repress, but I have a lot of privilege points too, you know, So when I talk about divisiveness and put downs and oppression, I'm very mindful of what I've just said really.

But also it is derogatory and I spend quite a lot of time with my clients who have. Exceptional gifts and talents in being able to read energy, get messages for people, healers, channels that do incredible, beautiful and profound work with their clients. I spend a lot of time un doing the fears, not just in past lifetimes of, you know, the burnings and the persecution, but this lifetime has just been ridiculed and not taken seriously.

So, For me, the woo is just, it's about being in flow with the truth of the universe from my perspective, which is there is an unseen and a seen element. There is a physical and a non-physical, and some of us can go between the two. That's. That's it. That's what the woo means to me. And sometimes that is emotions, you know?

And it's most simplistic and there's a lot more to it than that. So that is a very, very brief idea of explanation of why this podcast is called, What it's called, and exposing you to. The kind of things that we'll be talking about.

So if you do work in the woo  I would invite you to look at areas where you are in conversations with people, where you might minimize what you do. Any place where you use the word just before you're gonna say something you know, I'm a Tara reader, or it's just a way of tapping into my intuition.

Or where you might change the language of the way that you are saying something to make it more palatable to your audience. So whoever's listening to you, how you do that, how that impacts you. How that affects how you think of yourself in other areas of life. And if you are in that work category, if there's any areas of your life where you feel like you need to hide it, I'm not suggesting that you change that or you do it differently just to become aware and notice what impact that has on you, and just maybe play with the idea of saying to yourself, it's not where it's real, and just see what that.

Whether that feels more empowering when there's a sense of pride in your gifts and your abilities and your talents and the skills that you've probably developed over a long period of time.  So I would invite you to think of your Woo gifts, abilities, talents, and skills as your creativity and your artistry.

And you know, it's your creativity and your artistry because you can't not do it. You know, like I've got a few artist friends who just can't. Not do their craft. They, they have to paint, They have to make, They have to produce. They just, it's an inner urge and chances are you do the same thing too. Maybe you don't recognize it, so you know, I can't help but read energy.

Like it just happens and I explore it. I read channel material, I channel myself. I talk to my guide a lot. I have these kind of conversations all of the time. I'm constantly reviewing and thinking and reading about different cosmologies , different religions.

I can't not be who I am and neither could you. . And so if you're in the Woo, then it's a cracking club. Won't change it for the world. And you also could start to think about how you might overlap your more, I don't like the word mainstream. Maybe you are socially acceptable.

I don't like the term mainstream, but maybe if you are a, You know, my stereotype of the most mainstream drug you could have is a banker . I don't know why. So if you're a banker that talks to guides, how can those two things blend in your life more easily? How can you bring. Your craft, your artistry, your woo into your everyday life more and more and more, and seamlessly start to blend the two.

How can you begin to be proud of what you do? What would that look like? And I know some people who are gonna be listening to this already. , you know, so for some of us, me included, it might be how do you give those people that are kind of like derisive of the world would woo some more compassion and think, you know, they'll catch up one day, , but ultimately it's each to their own, but 10.

Ultimately, it's each to their own, but the tendency is for the woo to put themselves down or to shrink, or yeah, to struggle with wanting to be visible. And I'm really keen that this podcast changes that and that we celebrate it and recognize the usefulness and the realness of it in our everyday life.

And for God's sake, can we stop calling emotions? Woo . That's just the final straw for me. All right, so that's a very short introduction to why it's the Woo. It's Real podcast. And I'll see you in the next episode. Bye for now.

Email has been submitted.